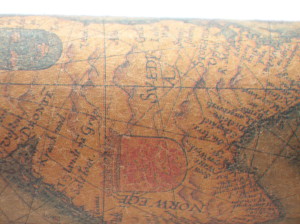 My son gave me a GPS system for my car last year and for the trips we’ve taken it has proven to me mostly reliable. The first hint that it was not something one should completely depnd on came when I  entered my home address just to see how it would route me from work. It didn’t do to well.

I pulled into my driveway and parked in fron of my house while the unit protested that home was still two blocks away. To insure that it was not my unit that was defective, I had a friend try theirs and the same thing happened. Then I started getting notifications from the manufacturer that there were updates available. Newly revised maps could be downloaded for a small fee that would provide the most up-to-date road information. There are two reasons why updates are necessary.

1. The maps that come with the device have errors. On the company’s website there is a link to report errors and updates. Rather than being something to rail against (“Why can’t these people get this right?”), we need to accept the fact that no map is perfect and that things change.

2. New routes are built, old one abandoned, many are modified over time. Even paper maps like thoe by RandMcNally are revised every year.

Ok, you’re asking me what this has to do with anything other than GPS and driving.

A few days ago I was chatting with an old friend. We had first become friends when we both lived in another state. He was moving in, I was on my way out. He came full of hope and enthusiasm about the future. His course was defined, his objectives were clear, his purpose noble. When we spoke last week, most of that had changed. They systems and criteria by which he had been living were proving to be inadequate and he found himself in the middle of cataclysmic change.

Had he been wrong all along? Had I been wrong too when I made major shifts in my life?

We were…like everyone else…like you…been following the best maps we had at the time. The maps had not been updated and there were errors in them we knew nothing about. The failure of an old map mandating a new map is called a paradigm shift.

Maps, the set of core beliefs and values that lead us to the decisions we make and on paths we take, are but an INTERPRETATION of reality, the best interpretation that can be made at the time. Just look at some old maps from centuries ago. There was no attempt to mislead anyone. The cartographers of the time did the best they could do with what information and with, this is critical, the UNDERSTANDING of reality they had at the time. Further exploration and experience would temper and modify their interpretation.

There comes a time, perhaps several times, in one’s life when the maps fail. We should consider this an equipment failure but not a personal failure. It becomes a personal failure only when we persist in following a map we know to be unreliable. There is no virtue in being faithful to a failed system.

Like Humpty Dumpty, not even a king’s horses or his men can reconstruct a faulty paradigm. To do wo would, in every sense of the word, be insane. Only crazy people persist in following a reality that does not exist. Once the map proves to be flawed, there is only one recourse – find one that is correct.

Your understanding changes. Even though your natural sight may have dimmed with age, you can doubtless see things more clearly now than you did when you were eighteen.

Some, who see your quandry and the consequential abandonment of a flawed paradigm, say you’ve just become bitter over life’s unexpected events or that you’ve lost the faith. I consider it enlightenment. I call it my “I get it” moments when I finally realize that a new paradigm must replace the old one.

So, what about you? How have you handled paradigm shifts? What advice can you offer to fellow sojourners? Where are your “I get it” moments?