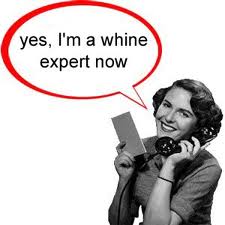 “How are you?” I asked the cashier. I had picked up a few items at the grocery store and was checking out.

We didn’t have the time to talk more but I left there impressed. I have asked that question of many clerks, cashiers, salespeople and waiters many times. I usually get a traditional “Fine” as an answer or a complaint. The most often complaint is from those who “have to work on the weekend or after a holiday.”

Okay, I realize that there are many who hate their jobs and perhaps they have good reason to. For those who have been regular readers of this blog you have doubtless detected a persistent theme – too many people whine about just about everything and anything.

Whining gets you nothing, advances no agenda, creates no positive energy or movement, and builds no momentum for success. It does irritate just about everyone around you and you will get attention. Others will sometimes give you what you want just to be rid of you, but beyond that it doesn’t do much.

There are three choices to life that all of us face and by which all of us live.

There are victims, those individuals who have suffered catastrophe and chaos and who must cope with circumstances not of their own making. I will not minimize the effects of such catastrophes nor the challenges they afford.

Second, there are volunteers, those individuals who chose victimhood as a way of life. Who use circumstances, even catastrophic ones, to excuse their lack of performance and make their victim status reason for why we should expect sub-par performance from them. This is also called a loser’s limp and you can read what I wrote about that here.

Third, there are victors. We tend to look at them as having never suffered any serious setbacks, not having endured any overwhelming catastrophes. We think of them as fortunate. It is seldom true, however. Victors are overcomers and are able to overcome for one reason. They refuse to engage in the luxury of whining. You will never hear from them an excuse for less than their best.

Lee Iacocca was responsible for the Ford Mustang, perhaps the greatest success in Ford’s history. On the fast track to the top, Iacocca expected to be appointed president of the company. When Lee Iacocca was fired from Ford Motor Company he found himself victimized by an unfriendly corporate structure. His response? “You have to play the cards you’re dealt. They may be lousy cards, but they’re the only ones you’ve got.”

Here’s a secret. Instead of wishing life was different, why not begin where you are and put the machinery of your life in motion to get where you would rather be.

I’ll end this with one of my favorite quotes.

The best day of your life is the one on which you decide your life is your own. No apologies or excuses. No one to lean on, rely on, or blame. The gift is yours – it is an amazing journey – and you alone are responsible for the quality of it. This is the day that your life really begins. Bob Moaward