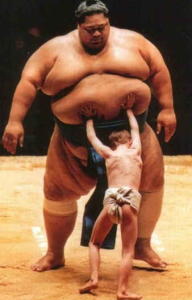 Once, when I was in Uganda, East Africa, for a few weeks helping out at one of the businesses that help underwrite the homes, clinics, and academies of Aidchild.org, the business I assisted is a restaurant in the city of Entebbe. On a Monday, a group of young people came into plan a birthday party for Wednesday evening.

When they had left, I remarked to our staff that it was good to have a group reservation for two days from now.

“One day,” the Ugandans who staff the business corrected me.

“How can that be? They asked. This is Monday and they are coming on Wednesday. There is only one day between the days.”

You have probably observed people who have known each other a long time say something like this.  Let’s say they are watching television. One of them will say, “Isn’t that what’s his name in that scene?”

“Yes, it looks like him but it’s the other guy.”

“Right! It is that other guy.”

Now at no time during the conversation has anyone actually identified precisely who they are talking about, yet each party of the conversation understand each other perfectly. But one listening may be left clueless.

There are definitive definitions to words that when strung together into sentences and paragraphs can create another definition entirely. That’s because the culture in which we ourselves thrive has developed a unique outlook, a perspective that really does defy logic and reason in the scientific sense but is completely logical and reasonable in the social sense. (I use the word culture to mean more than racial. Different cultures exist within every race.)

Thus an event planned on Monday to be held on Wednesday is two days away to some and but one day to others.  I have been in Uganda many times and for extended periods of times. Our entire staff is Ugandan. It is always interesting to discover how we communicate so differently. A former English colony, the official language is English but there are over thirty tribal languages spoken here. Even the English used here has its own set of rules and a pronunciation that can challenge even the most astute linguists. When Queen Elizabeth visited here she remarked that she wasn’t sure what language was spoken but it was certainly not English.

Well, it is English and it is very different from American English.  There are no universally accepted rules for the use of language. Americans believe they hold to the standard. The British are certain all others except the King’s English are aberrations. But the Ugandans are unfazed by either.

When my brother-in-law lived for a time in Kenya, he came back to the US with the realization that we see things through the lens of our own culture. Lots of travelers realize that. Few actually accept the differences as little more than differences.

We tend to grade things as better or worse, inferior or superior, greater or lesser. But usually they aren’t.  (Of course, murder is murder and no amount of social wiggling can change that.) The rub comes in when we try to be more than tourists. Differences in perspective and definition are quaint and colorful for ten days. When you have to live and work in it, it often becomes irritating, even vexing.

Here’s a hint, do something about it before you get vexed or irritated. Newlyweds have to within weeks. (Watch “The War of the Roses” for a perfect demonstration of this principle). State departments routinely send their personnel out of the country for extended visits a few times a year and rotate them out entirely after two years or so because they can begin to chafe under the constant rubbing of another culture.

You are probably not exceptional. Nor am I. And if you think you can change it or fix it, you are in for a very difficult time. Enjoy as much as you can, avoid what you cannot enjoy, abandon when your blood pressure stays high.

Remember, what seems like one day to them can seem twice as long to you.