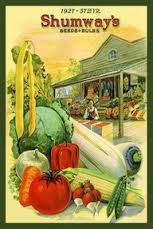 They usually arrive in the deepest darkest days of winter. Their appearance signals the message that the days will indeed brighten, clouds will give way to sunshine, and long nights will be pushed back by longer days.

What are “they?” They are seed catalogs, those colorful paper promises of better times just ahead. They bring to us memories of vibrant blossoms and savory vegetables. They inspire us with idea if what we can do now to make tomorrow even better. They are vessels of promise.

It is almost April. Spring has already arrived by the calendar even though the weather may not yet know it. Most of us have been busy planning. Some in warmer climes (I am in Florida) can do more than plan; we can plant too.

Now, this is not an article about planting nor is it about seed catalogs. It is a message I hope provokes you in two dimensions.

First, the seed catalogue idea. Most of us know how it feels to get one in the mail. They seem to come on cloudy days full of rain and gloom. But their colorful covers and ad copy that proves that the photo spreads aren’t the only things that are flowery. They lift spirits and point our thinking away from today out to a more pleasant time that is surely coming.

Now, if a simple publication can make such a difference in the way you feel, think what it does for others.

You can make it happen, you know?

You can be a seed catalogue distributor too. It is simple. Sit down right now, pick up the phone, pull out letter writing stuff (you do remember that don’t you?), or find that particular email address. Call, write, or message someone just to bring a bit of color and promise to them. There are people who have made an impact on you, have built something into you, who have provided that spark that got you moving again when things had kind of stalled.

The time for flowery words of praise and admiration are most often done at funerals and memorial services. But they can’t know what you have to say. It is too late.

Say it now. Just call, write, or message and say what you feel. You will not regret it. Or maybe you feel a phone call, letter, or message is not enough.

What I am about to write may seem like shameless self-promotion but I assure you I do not intend for it to appear that way. My example is just that…an example.

A bit over ten years ago I left home on a late Saturday night for a short stay in an airport hotel. My flight was very, very early in the morning. I boarded a plane for my destination and arrived without a hitch. I got into my rental car and drove to the church. I was going there unannounced having determined before my trip that my target would indeed be there that Sunday.

I parked, gathered my things, and entered the building. As I passed through the entrance and into the offices my target was there. Seeing me, his wife turned to her husband, the pastor, and said, “Let him preach today.”

“Thank you, no,” I said. “I am not here to interfere but I would like maybe five minutes to greet the congregation if I may.” My request was readily granted. My target was an old friend. The occasion was an almost exact anniversary of our meeting some thirty years before.

At a break in the service, he introduced me (I had been there before) and I gathered my stuff and ascended to the podium. I explained the purpose of my visit something like this.

“When I was a novice minister I discovered that it is difficult to break in to established circles of service. More experienced people have found their places of service and seem to guard the door with both suspicion and apprehension. This man here, your pastor, was unlike those others. In the Book of Acts there was another new guy names Paul who found it very difficult to get through the door until a seasoned fellow named Ananias let him in. Later in Paul’s life his personality and outspoken manner landed him in trouble with the religious crowd and he found himself needing assistance but this time it was not to get in but to get out. A bit later Paul’s detractors enacted serious damage to him and left him for dead, but once again there were those who came alongside and lifted him up.”

Turning to my friend, I told him “You have been that for me time after time after time. When I was a start-up you opened doors. When I was in trouble you found passage through. When I was down for the count, you breathed new life into me. You, my friend, let me in, you let me out, you lifted me up, but you have never let me down.”

By then, everyone in the sanctuary was crying. All of us. You see, we hear complaints by the bushel. We get snowed under with work, pressure, trouble, and worry. We don’t get seed catalogs often enough. We face down failure and walk the precarious edges on the slippery slopes of shoulda dones and should not have dones. We wage war every day with the effects of poorly considered actions and imprudent decisions. It isn’t often enough we hear about those many things we’ve done well, celebrate the successes we’ve won, or bask in the accomplishments of a life well applied.

Second, there is the question of why a seed catalog makes us feel so good. Most of us are very unaware of the impact our life has made. There are many unknowns out there whom you have touched and within whom you have made a serious difference.

Many of them. Your influence may seem to you to be small but I can assure you it is of far greater significance that you’ve ever considered. We’ll say this at your funeral but by then your mind is somewhere else. So, let me say it now. You are a planter of promise. The winter will soon be over and brighter days are ahead. You’ve had harvests before but nothing like those that lie just ahead.

Seed catalogs. Send one today and receive the one you are looking at right now.