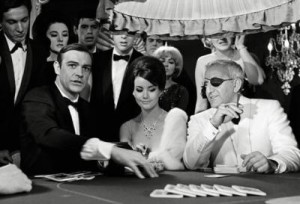 In nearly every Bond film and book you will find at least one casino, one instance of gambling.  Ian Fleming, Bond’s creator, was a consummate gambler albeit not a particularly successful one. In Casino Royale, the very first Bond book, Fleming sets the tone and describes a key component in the nature and personality of James Bond – the aptitude for taking risks. Indeed the first words in that first novel, after several edits and rewrites, would read: “The scent and smoke and sweat of a casino are nauseating at three in the morning…”

Here’s a passage found a few pages farther into the narrative:

“Above all, he liked it that everything was one’s own fault. There was only oneself to praise or blame. Luck was a servant and not a master. Luck had to be accepted with a shrug or taken advantage of up to the hilt. But it has to be understood and recognized for what it was and not confused with a faulty appreciation of the odds, for, at gambling, the deadly sin is to mistake bad play for bad luck. ..he knew he too would be branded with the deadly question-mark he recognized so often in others, the promise to pay before you have lost: the acceptance of fallibility.” Casino Royale

Bond did everything deliberately, everything on purpose. Granted gambling is a game of chance, but Bond approached even that risky venture with a deliberate and determined purpose. Did he lose? Yes, from time to time. Ian Fleming added the gambling side of his created protagonist because Fleming himself loved gambling and did so often. But he did so because it added dimension and character to his creation, a sybaritic element that paints the most famous secret agent in history as worldly and gritty .

Which brings me to my point. I am not a gambler in the casino sense. Money is just too hard to get to risk it in that way. And this article is not about gambling even though my opening lines might lead you to think it is.

It is about risk-taking and doing so intelligently. Professional gamblers are risk-takers but they are not “gamblers” in the throw the dice out there and see what happens sense.

There are intelligent risks and there are foolish ones. Hardly anything is certain. But this is a not a call to a life of haphazard living, careless ventures, or recklessness.

Because this is article is one of a series called “Everything I needed to know about life, love, and leadership I learned from James Bond” I will use that is a reference point. Here is what I have learned from Bond about risk taking.

“Luck was a servant not a master” so said Fleming about Bond’s approach to it. We can recognize the place of luck without canonizing it. Some have discounted luck entirely. Like Henry Ford or Thomas Edison, they say that luck is mere hard work and persistent effort. But an ethical examination of their success must recognize that they developed products and marketed them at the time the public was ready to buy them. J. Paul Getty said that “some men find oil and some men don’t!” Luck is by no means the only component in a successful life, but it is indeed a player.

When I lived in the Caribbean, I developed a friendship with the 60’s singer Jonathan Edwards who lived there too. You may remember him for his hit “Sunshine” released January 1972. He explains the success this way, “”It was just at the time of the Vietnam War and Nixon. It was looking bad out there. That song meant a lot to a lot of people during that time–especially me.” That song was not even supposed to be released but a technician accidentally erased the master recording of the final song on an album so they luckily had Sunshine to put on instead. Luckily! It was a huge hit.

He and I enjoyed a candid talk when I questioned why some preachers labor in obscurity and enjoy virtually no success while other men whose talents are far less become high profile figures. Jonathan said the same thing happens in the music industry. He was lucky that his song was released just at the time to resonate with the general public.

I believe luck is a servant, however, not a master. You do what you must to maximize the chances of winning, but sometimes it just doesn’t work out. We westerners struggle with this because we seem bent on explaining everything, on finding a reason for what happens. May I suggest that for much of life there are no reasons. It is just life. Sometimes you win, sometimes you lose. You will drive yourself and those around you crazy if you spend too much time and energy trying to explain what happens and why. This is, by the way, a delusional effort to maintain control. It stems from an exalted self-opinion of the efficacy of one’s personal powers. Be honest now, there is not much we really can control.

This brings me to another element of risk-taking found in the final sentence of my quote above “the acceptance of fallibility.”  Trying to be spot on all the time is exhausting mentally and physically. If I may I’ll quote another of my favorite characters, the detective Nero Wolfe created by author Rex Stout. In one of his stories, his assistant Archie Goodwin sent a young woman who thought her life was in danger away from Wolfe’s home and office thinking she was exaggerating. When she was later the victim of murder, Archie tumbled into despair and self-condemnation. “It is vainglorious,” said Wolfe, “to condemn oneself for lack of omniscience.”

“Vainglorious” is a powerful word. A vainglorious person is filled with self-importance. Face it, we are finite beings who are flawed and faulty, but who do remarkably well in spite of our flaws and faults.

However, I do not want to discount the role of intelligent risk taking. About Bond, Fleming wrote that “the deadly sin is to mistake bad play for bad luck.” We cannot excuse lack of effort or lack of intelligent effort on bad luck. This is the opposite side of the picture. Recklessness must not be clothed in righteousness. Many of my friends along the way have done just that. They have lived on what they called “faith” when what they actually have done is lived foolishly and carelessly.

Walking circumspectly is no crime. Bond did so, had to if he hoped to survive in his high-stakes world. Prudence capitalizes on circumstances, takes advantages of what conditions and odds may exist. In another passage in Casino Royale, Bond muses about his habit of watching what trends are at play when playing roulette. Now, logisticians and mathematicians know that each and every spin of the wheel and drop of the ball is as risky as the one before and that it cannot be predicted what will happen. Each circumstance is unique. Fleming says this about Bond – “Bond didn’t defend the practice. He simply maintained that the more effort and ingenuity you put into gambling the more you took out.”

He’s quite correct, you know. Life and living it successfully is a blend of circumstance, chance, response, and opportunity. Bond has a lot to teach us about living. One can be reckless or too guarded. One can make foolish ventures or none at all. Either should be avoided.

Now, for my Christian readers who may be uncomfortable with what I’ve said here, let me remind you of the words of one of the most sagacious persons ever, Solomon, who said “I again saw under the sun that the race is not to the swift and the battle is not to the warriors, and neither is bread to the wise nor wealth to the discerning nor favor to men of ability; for time and chance overtake them all.” Ecclesiastes 9:11.

Some commentators consider those to be the words of a cynical bitter person. I don’t. I consider them to be sound advice from someone who has lived life, found that some of his paradigms simply did not work, and discovered that there are not neat and pat answers for everything. Do yourself a favor and stop pestering others with your claims of infinite solutions and insider secrets. Too much of Christianity these days is an attempt to explain, or explain away, the exigencies of life.

Every day is a roll of the dice. Most of us will win most of the time. Live intelligently, take risks but not foolish ones.