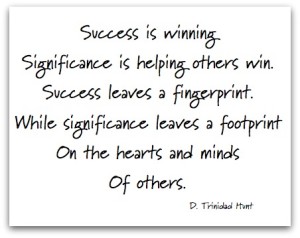 James and Dan have been friends for more than forty years. They had met in college where James was a student and Dan a dean. Dan left the college and moved to a distant city before James graduated, but they stayed in touch and over time their friendship deepened. Phone calls were more frequent than visits but through the ups and downs, ins and outs of life they counseled and consoled each other.

James and Dan both pastored churches, different denominations and different cities, but those distinctions were minor. Whenever one was in the other’s city, he knew he would be welcomed. In the thirtieth year of their friendship, James had the sad occasion to say goodbye to five of his friends who died suddenly, too soon. At too many funerals and memorial services, he had listened to friends and relatives speak eloquently of their departed friend, saddened that the one who should have heard them speak, perhaps needed to hear it most, was not there.

So, James determined to not let that happen. James made a phone call to surreptitiously discover if his friend Dan was going to be in his (Dan’s) church on a certain Sunday that October. Confirmed that Dan would be there, he made a quick phone call to a local engraving shop and placed an order.  James drove from his home to the nearest airport and checked into a hotel in order to make a very early morning flight. Arriving in Dan’s city, he rented a car and drove to Dan’s church.

Unannounced, James entered the building and found Dan in his office preparing for the service. “Let him speak today,” said Dan’s wife when she saw James enter the room. After warm greetings, James assured him he came only to visit but would like 5 minutes to greet the congregation. At the appropriate time in the service, Dan introduced James again, no stranger to the church.

James climbed the two steps to the pulpit and began.

“In the Book of Acts, there is a story of a young man who had a difficult time breaking into the close community of Christians in those early days. He was an unknown quantity, had developed something of a reputation as a firebrand, and found not too many doors open to him. But an older, more established leader saw something promising in the young man and introduced him around, encouraging the established ones to welcome the new guy. Over time, as the new guy became more accepted, his reputation as a firebrand began to reveal itself. On one occasion he got himself into big trouble, so much so that the religious establishment stacked up against him and threatened his very existence. Once again, the older gentleman came to the rescue and found a way out of the mess. On a third occasion, the young man suffered serious injury from attacks made against him that actually threatened his life. Left for dead, friends came to his rescue and lifted him up.”

James, who had been speaking generally and specifically to the congregation, turned now toward Dan and spoke directly to him.

“I could rewrite those words in my own life. When I first started out, I found nothing but closed doors but you used your influence and opened things up for me. When I got myself in trouble, you did what you could to resolve issues and get me through them. When I was down for the count, you intervened and spoke words that made a huge difference. You, my friend, have let me in when I was out, you have let me out when I locked in, you have lifted me up when I was down, but you have never, YOU HAVE NEVER let me down.”

Reaching into the bag he was carrying, James lifted out a small wooden clock, the one he had ordered from the engraver. He read its inscription. “Old cars, old books, old friends, good things just get better with time.”

There have been many clinical studies on human needs. There is, of course, the physical needs of food, water, and shelter. Other needs have been identified and they are valid. There is one need, however, that I think reigns supreme over them all.

I read the birthday musings of another friend who was sketching the events and accomplishments of his life. Within his short essay, he wrote something I found very, well, significant. He wrote, “I would like to hope that my life had made a difference.”

There you have it. The need for significance! In the end, which we all get to eventually, what we really want is to hope, to know that our life has been worthwhile.

Okay, you ask, what does that have to do with me today?

Here’s what I think would be the right response. As soon as you finish reading this, and I’m all but finished. Get up out of your seat, pick up a phone or go to someone face to face, and tell them, “I just want you to know that you have made a difference in my life. I am glad I know you.”

You can take the conversation from there. Got it? Good. I’m done. Pick up that phone, don’t send an email, this needs to be spoken if you can do that at all. Get up out of your chair, go find that person, and tell them.

Do this once a day for a week, then once a week for the rest of your life for someone. Don’t wait until the memorial service, they can’t hear you then. But they surely can right now.