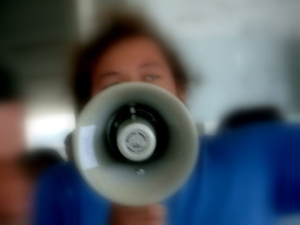 In our community here, there is a spry and quick-witted neighbor who arrives early for every event. If it is scheduled for 5:30, she will be there before 5. Quick to help and possessing a positive temperament, she is always welcome.

But a conversation is almost impossible. Why?

Because she talks at people, seldom with them.

One of my friends on Facebook posts several comments every day. But we know almost nothing about him because he almost never posts anything about himself. He is what I call a “broadcast friend” because he is always broadcasting the Facebook equivalent of information commercials. Several times each day I get a religious posting for something I should read. Actually when I think about it there are several friends who do this. I am talked at rather than engaged in conversation. Granted, the nature of the internet lends itself to make a post and see what happens, but it also makes fairly convenient two-way conversation much simpler and quicker than ever.

Now, before I get emails from many of you, and certainly before you unfriend me, let me assure you I do read what is posted. But it is like reading billboards or listening to a broadcaster. I tune into a station because I like the DJ and the music he or she plays. In the same way I tune in to my friends posts, or invite my neighbor in because I like them and do connect with what they have to say. I am not offended by their posts or her conversation.

Nor do I mind the occasional public service announcement. But I usually feel I am being talked at rather than being talked with. My neighbor talks almost incessantly but really never engages the person she talks with. She reveals little or nothing about herself and learns nothing at all about the person she speaks to (for all you grammar coaches I know it should read “the person to whom she speaks” but since this is not a post on grammar and is a post on encouraging comfortable, meaningful conversation, let’s just leave it there, ok?).

Like the Facebook friends described above, she broadcasts to us.  We can be personable without being too personal which is probably a wise policy unless you are very good friends. If you are like me, you have only a certain number of presets on your conversational radio and you can only tolerate so  much broadcast style of communication. Sometimes I just want to turn off the radio and talk with somebody.

In my last post I wrote about the type of place Jesus would hang out. I have an old friend in Arizona, a genuine, 100%, sure ‘nuff cowboy who said to me that the one of the things he misses most now that he is a Christian is the bar he used to hang out in. When I asked him why, he said it was the conversation over drinks and around the bar.

Think about that. In Church we sit in the audience and those people up there (I used to be among them up there) stand up there and speak at us. Conversation with those around us is generally (not exclusively) personable but relatively superficial. There just isn’t time for anything else. Other events are those were we are being talked at instead of engaged in conversation.

For a shameless commercial, let me insert here that this is why we are planning events like Desert3d. We do not intend to stand up front and speak at anyone for hours at a time. We do intend to provoke, encourage, and reward genuine conversation .

The internet has changed things somewhat. Blog posts usually encourage comments (I do in this one and on my other blogs). One of the reasons I got into ham radio was the ability to converse with others in so many countries of the world. When I was in Uganda, I would fire up my transmitter every afternoon about 4 p.m. and join in with two hams in Great Britain, one in Malawi, and another in Italy. The conversation would flow back and forth, up and down, but we got to know each other on more than a superficial level. Broadcaster cannot do that. They can convey information, stimulate emotional responses, and sell things, but they cannot get beyond the superficial.

Go ahead and make your posts. We know what you stand for. But consider leaving the broadcast style to the organizations and companies whose purpose on Facebook, Twitter, or other social networks is commercial or ideological.  Rather than merely throwing things at us, perhaps we could engage our connections.

When it comes to your personal conversations off-line, there are many occasions when the simple transfer of information is entirely appropriate. There isn’t time at work to be too personal and it usually isn’t the place. But let me ask you if you talk at people or with them? Do you have lots of acquaintances but far fewer close friends?

And  please let me know if you’ve found ways to break past the broadcast barrier.