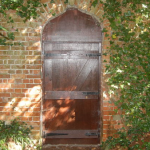 A man is driving down the road and breaks down near a monastery. He goes to the monastery, knocks on the door, and says, “My car broke down. Do you think could stay the night?”

The monks graciously accept him, feed him dinner, even fix his car. As the man tries to fall asleep, he hears a really strange sound. The next morning, he asks the monks what the sound was, but they say, “We can’t tell you. You’re not a monk.”

The man is disappointed but thanks them anyway and goes about his merry way. Some years later, the same man breaks down in front of the same monastery. The monks again accept him, feed him, Even fix his car. That night, he hears the same really strange noise that he had heard years earlier.

The next morning, he asks what it was, but the monks reply, “We can’t tell you. You’re not a monk.”

The man says, “All right, all right. I’m dying to know. If the only way I can find out what that sound was is to become a monk, how do I become a monk?”

The monks reply, “You must travel the earth and tell us how many blades of grass there are and the exact number of sand pebbles. When you find these numbers, you will become a monk.”

The man sets about his task. Some forty-five years later, he returns and knocks on the door of the monastery. He says, “I have traveled the earth and have found what you have asked for.

The monks reply, “Congratulations. You are now a monk. We shall now show you the way to the sound.”

The monks lead the man to a wooden door, where the head monk says, “The sound is right behind that door.”

The man reaches for the knob, but the door is locked. He says, “Very funny. May have the key?”

Finally, the monks say, “This is the last key to the last door.” The man is relieved to no end. He unlocks the door, turns the knob, and behind that door he is amazed to find the source of that strange sound.

Do you want to know what it was?

I’d like to tell you what it is but I can’t because you’re not a monk. 🙂

There always seem to be some esoteric body of knowledge that holds the key to health, wealth, and prosperity. A search through the self-help section at the bookstore or an on-line bookseller will turn up books with titles like 7 Secrets of This, 5 Hidden Truths of That or some such. Many would think that happiness is the result of some secret reserved for only a select few.

When it comes to being happy, there are indeed keys that I would like to share with you But I wouldn’t necessarily label them as “secrets.” (FYI, the marketing geniuses tell us that using labels like “Secrets” and “Hidden” attract the most attention and result in more sales.)

So, before I get further into my list of what it takes to be happy for the rest of my life, let me engage in a little self-promotion and point to 5 blog posts before this one:

Let’s beging with addressing what you don’t need to be happy:

King Solomon, ancient ruler of Israel, is regarded by many as one of the wises persons ever. He was fabulously wealthy, owned the best homes, drove the latest model chariots and powered by the highest horsepower, and had for his pleasure hundreds of beautiful women (It was the custom in those days, still is in some parts of the world, and probably the secret fantasy of most men). So, I think we can give a listen to his advice since he has indeed experienced living large in its most extreme sense. Solomon said “Give me neither poverty nor riches; Feed me with the food that is my portion, Lest I be full and deny Thee and say, ‘Who is the LORD?” Or lest I be in want and steal, And profane the name of my God.”

So, what do you need to be happy?

Not because you are not qualified to know, but because I am out of room for this blog post and will have to continue this next Tuesday. See you then.