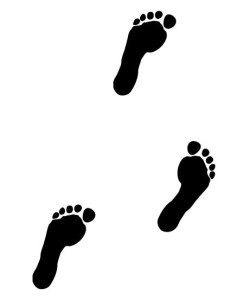 It’s been more than five decades now but I remember it like it was just today. I was 8 and my Dad took me on an all day road trip. He owned a small television and radio sales and service business in the town of Houston, Missouri, (county seat of Texas County, the largest in the state).

Back in those days, people actually had their televisions and radios repaired when they broke down. There was a good market for used televisions too since the cost of new ones could easily run a few hundred dollars, quite a chunk out of the average take home pay in the 1950’s. He ran a successful business in that small town but it was dependent on a continuing supply of product to sell.

My father bought used televisions for resale from a guy named Mike who ran a wholesale warehouse from an old cinema building in St. Louis, a half-day’s drive from our little community. I had never been there and on that day in August, I was going along.

We left early, driving up there in an old panel truck (like the one in the photo). There were no vans as would eventually become popular in the 60’s. We arrived in St. Louis about noon.  Because there were no interstate highways in those days it took a while. After a lunch of burgers and fries, we arrived at Mikes. 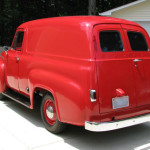 He was a friendly guy and showed me around a building larger than any I had ever been in. After Dad made his choices and struck a deal, the TV’s were loaded into our truck and we headed for home.

A few miles outside of the city, Dad pulled off the road and parked in front of a roadside stand where he bought a watermelon. Back in the truck, I looked forward to watermelon for dinner that night, or supper as we called in in that part of the country.

But a few miles later he pulled off the road again and took a short drive down to the banks of the Meramac River. From somewhere he produced a knife and the watermelon was sacrificed on the altar of a fallen tree.

I remember that trip every August. I never spoke of it to my father and I am not sure if he even remembered it.

We seem to think now that expensive and elaborate trips are necessary to build great memories. In these days of greater affluence, we bestow upon our children stuff when what they will doubtless remember most are events like my St. Louis journey.

An old man climbed the steep stairs into the attic. After he had been left alone, the memories long lost to time and sorrow at last overcame his reluctance to explore once again those paths long ago trodden. So, that morning, hoping to see what happy days he might relive, he ventured forth into the recessed spaces of the home he and the wife of his youth had occupied nearly all their life together.

Somewhere inside cardboard boxes now brittle with age and covered with dust would be photos that would recall from the past words of affection and consideration he hoped would chase away his loneliness. His world had not ended when she passed. It had simply stopped, suspended between a past long gone and an uncertain tomorrow.

After lingering some moments over an album his eye caught a bound volume which held journal entries from the youth of his now grown son. It surprised him that his son had kept a journal. Opening the book, a smile crossed his lips and brightened his eyes when he read one particular page.

Exploring further, he found his own journal and then found his entry for the same day.  The words of his son spoke sweetly and comfortingly to his soul while his own words reminded him that in the haste to do all that seemed so important then, he might have missed treasures in the present.

Lingering long at those precious volumes he relived again through those words that carried him back to a time he had forgotten. But it was the recognition that his son’s recollection of those days was so completely different than his own which worked its most compelling magic.

He closed his son’s journal and picked up his own. Finding the correct page, there in his own handwriting, were these words:

With trembling hand, he picked up the boy’s book and there it was. Written in a sprawling hand, it said,

“Went fishing with my dad. Best day of my life.”