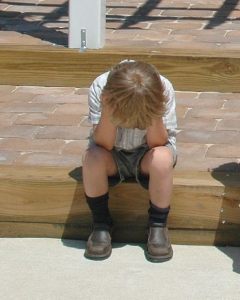 The kid was screaming and carrying on… but not as much as his dad.

It was kid’s project day at Lowe’s, a Saturday once a month when parents bring in their little darlings to make a craft project out of kit material supplied by the store. The store associates usually have a good time and most kids are well-behaved.

But this one was not. However, compared to his parent, the kid was a saint. Dad was pissed because the store had run out of project kits. The family in question had not arrived early so those who got there ahead of them got the available kits.

The kid was unhappy and Dad was being a jerk. “You’d better find one,” he spoke belligerently; “my son must never be disappointed!”

Can you imagine such an unhealthy admission? “My son must never be disappointed!”

The lesson taught to this future member of the narcissistic criminal league is that his needs and expectations come ahead of everyone else’s and that what he wants he must have even if his acts did not lead to fulfillment. Disappointment, caused in this case by tardy behavior and poor planning on his father’s part, is an unacceptable consequence.

Society these days tends to gravitate towards a philosophy that we, and unfortunately our offspring, should be immunized against the downsides of life. We believe, and condition others to believe, that someone else should protect us from things that don’t always work out.

Dad should be teaching junior that he has to roll with the punches, go with the flow, learn to work through his disappointment and be man about it. There is an egalitarian movement in society which wants to level out everything. Some well-meaning but misguided educators want to abandon grading systems and, Lord help us, eliminate scoring in interscholastic sports because is makes underperformers feel badly when they don’t get the top spot. There is even some who talk of changing the Olympics because those who win only Silver are disappointed that they did not get the Gold.

God forbid that they feel badly. Let’s somehow protect and immunize ourselves so we don’t have bad feelings. In the UK, they’ve talked of changing the name of the unemployment office because calling people unemployed makes them feel bad.

The inmates want to run the institution and insanity is becoming the accepted wisdom. I have to tell you, if this persists, I’m going to be really disappointed.