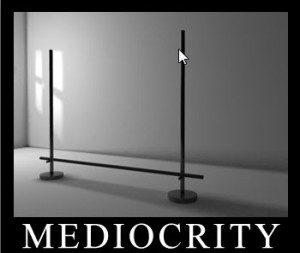 Last night I watched three episodes of a program I’d never seen before. It was one of those business intervention reality shows called Bar Rescue. One episode I watched should have been called Bar Wars because the consultant/host of the program fought almost constantly with the bar’s owner.

Briefly, the bar was 45 years old. Under the newest manager who had been owner for several years it had become dilapidated and dingy. The business was losing $200,000 a year and the owner had not taken a pay check in three months. The consultant/host offered up a dismal diagnosis which provoked the ire of the bar’s owner. For most of the program the owner reacted to everything. At one point the consultant conferred with his two assistants when one of the assistants said, “I have never seen anyone fight so hard for mediocrity!”

That statement was an incredibly insightful analysis. I have seen it often in my experience as a consultant. Organizations and businesses plod along barely surviving. To outsiders the reasons are obvious and usually simple to remedy. Yet those in charge fight tooth and nail to keep things as they are even though they are terrible.

So, let me offer some lessons speaking as an outsider in general. You can apply then in specific to your situation.

Ok, I think you get the picture. So now it’s time for your homework assignment. If things are going well and you are generally happy and content then take a moment to identify why. You are doubtless doing things right and it is paying off.

But if things are not, if you sense that they are gradually slowing down and falling apart, what are you going to do? Whose advice will you seek out? What are you prepared to do to fix it? Can you resolve now to abandon the fight for mediocrity?

SPECIAL NOTICE: I am on my way to Uganda, East Africa, so this post is not hitting the web at the regular time. Mine is an unforeseen trip but not an emergency. I’ll be posting more from Uganda. I’ll be there for 6 weeks.