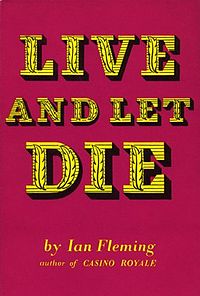 He just could not get past it. The tragic event happened a hundred years ago. He wasn’t there but it had happened to his ancestors so he carried the torch for them. It seldom came up  in conversation but was never far away from his thoughts and always affected his attitude. It colored everything that happened to him and tinted every encounter.

He was a former business associate. The event was the battle of Wounded Knee. Since the man was part Lakota, the event had a family connection. I do not want you to think that anything I write here is in any way minimizing the tragedy and brutality of that battle nor am I in any way discounting the atrocious behavior of the soldiers.

By now you are probably wondering what this story has to do with the title of this article. Well, it’s like this. The book and title is “Live and Let Die.”

We most often quote the axiom “live and let live.” It is true enough and offers sound advice for allowing people to be people and ourselves to be ourselves. But that’s not the title of the book and movie. Live and let die has more to do with the past than does the other more familiar saying.

Live and let die is really, really great advice. So, here are three ways to do just that.

There is no future in the past so just let it go. I am not suggesting that memory loss is the answer. I am suggesting that memory management is. What’s done is done and there is no way to redo it. Not even God can change history. But you can leave it there. Veronica Roth, author of Insurgent, wrote in that book, “My name will be Edith Proir,” she says. “And there is much I am happy to forget.” So, may I ask you, what can you find that you are happy to forget? I risk irritating some of you by saying that I am afraid too many cling to the past with its errors, its offenses, its failures, its injuries, and have made them the focal point of living. Ian Fleming is correct – Live and let die!

Forgive yourself – C. Joy Bell wrote that “Diamonds are held under tons and tons of pressure, extremely high temperatures of fire and shuffled under shifting of tectonic plates, for a long, long time! Yet when they come out from there and are put on display for their beauty; does anybody stop to evaluate the diamond based upon all the shit it’s been through and say “Remember that disgusting hole it used to be in? I bet it was hell in there!” No, people don’t remember where a diamond has come from; they just see the beauty of it now. But it wouldn’t have become so beautiful, you know, if not for all of that! So why should we look at other people, or at ourselves and evaluate them/ourselves based upon their/our pasts? Shouldn’t we forget that? And only see the beauty that is in front of our eyes? Whatever it was, it made you beautiful! And that is what matters!” Listen to me very carefully. Most of your friends see what you are, not what you were. What’s more, most of them loved you anyway so what could be better than that? Live and let die!

Forgive others even if they don’t ask for it. – I’ll probably get email over this one so let me explain. I am not so naïve as to suggest that the people whose actions or words have damaged us or others have all suddenly changed and we can be happy clappy with them. No, indeed they may not have changed at all. There are some offenses that are not worth carrying around. People are people, they make mistakes, I make mistakes, you make mistakes. Don’t be so sensitive over every offense. Most can just be forgotten. But, there are toxic people who have wrought injury. Forgiving them does not mean we erase what they’ve done. It simply means we release them from any obligation to change. It also means I do not have to remain connected to them IN ANY WAY! Unforgiveness grants them free rent in your head. You remain chained to them and what they’ve done. Forgiveness evicts them from your head and cuts the chains. Now, let them go. Don’t attempt any longer to change them. Forgiveness does not mean foolishness or gullibility. Forgiving people are smart people, they are decisive people, and they take direct control of their lives and situation. John F. Kennedy said to forgive your enemies but never forget their names. Bernard Meltzer said “When you forgive, you in no way change the past – but you sure do change the future.”

Nostalgia can be a pleasant journey but it leads nowhere. The only options you have are to look to the future, live today, and let the past go. You could be like my associate who to this day remains chained to events one hundred years old.

Thanksgiving is virtually impossible to do, virtually impossible to enjoy if you’re dragging the corpses of  the past around with you. I pastored a church once that was mostly populated by people pulling corpses around. They held on to the past hurts and offenses of others like they were family heirlooms. They were the most unthankful bunch I have ever encountered. I wrote about this earlier (you can read it here) and how they were completely incapable of giving thanks for even one month.

It was a pathetic and tragic situation. Happiness lay so readily within reach and they refused to grasp it. They had never accepted the secret of thankfulness and peace. They had never learned to live…and let die.