“Pay attention to where you are going because without meaning you might get nowhere.” – Winnie the Pooh 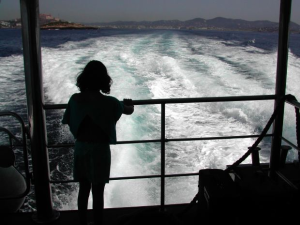 I am presently vicariously travelling around the Isle of Capri just off the coast of Italy from Naples. My journey is not one of tour buses and museum excursions. It is entirely within the pages of the “Conde’Naste Traveler Book of Unforgettable Journeys, Great Writers on Great Places,” a wonderful book of lengthy but fast moving travel narrative. Each section is expertly penned by a different adventurer; all of them accomplished travel writers.

The Capri section I am reading now was written by Shirley Hazzard (as far as I know not related in anyway to the Dukes) who first visited Capri in the 1950’s. Although the island is just a short ferry ride from the mainland, Ms. Hazzard’s description of the passage is particularly eloquent and provoked this article.

“That, then, is the approach; the old, congested, clamorous town of Naples opening on its vast and lovely bay; the crossing, past Homeric scenes, to the island, whose features are slowly disclosed—an interval in which we leave our knowing mainland selves behind and become accessible to destiny.” (emphasis mine)

That last statement is the focus here today – leaving our mainland selves behind to become accessible to destiny. There are vistas of discovery that lie just off shore from our well-trod familiar paths. There are people to know, things to do, places to see, and ideas to uncover we have never even considered because we are inaccessible to destiny.

We settle for far too little. We fall in place, develop a routine, and seldom vary from it. Some researchers say that the vast majority of us never learn anything new after high school.

When my brother-in-law and his wife returned from 32 months in East Africa he asked me, “Do you know that Americans have a culture?”

Now, actually I did know that because my wife and I had been living and working on the Navajo Nation for several years. Our setting brought us face-to-face with a culture that processed information differently and saw the world differently than we did. Not better than we did, not worse, just differently.

I was with a group of Navajo leaders when one of them said, “Let me tell you a joke.”

“What happened to Dr. Pepper?”

“He went to Africa and is playing the piano there.” The entire room erupted in raucous laughter. I didn’t get the punch line than and I still don’t. But they did.

Yes, we have a culture. We see things from the perspective from when we see things. As natural and normal as a self-focused outlook is, for most of us it goes unchallenged.

Along with that limited outward perspective is a restricted inward perspective. Most of us cannot see ourselves doing anything other than what we do in the place we do it.

When we sold out in Arizona and moved to the Caribbean, many people told us how lucky we were. But luck had nothing to do with it. We were willing and decisive enough to “leave our mainland selves behind and become accessible to destiny.” That application – moving to another place – is in itself limited. There are vast and wonderful achievements to claim but one must get up and go after them. They will not track you down and impose themselves upon you.

Is your mainland self shore-bound? There is a destiny out there for you that you may not even be considering because of the limitations in your own head.

Let me conclude with an excerpt from a poem by John Greenleaf Whittier:

“For all sad words of tongue and pen, The saddest are these, ‘It might have been’.”