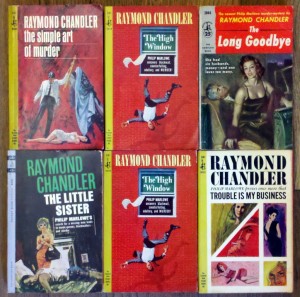 I am a murder mystery fan. I like the books and watch a lot of movies in that genre. I began with the Hardy Boys as a kid, soon graduating to Agatha Christy’s Miss Marple and Hercule Poirot. These days the list includes traditional writers like Rex Stout’s Nero Wolfe, Daschiell Hammett’s Sam Spade and Nick and Nora Charles (The Thin Man), and Raymond Chandler.

Today is his birthday, born in Chicago (1888). His parents were Irish, and after his father left the family, his mother moved them back to Ireland, and he grew up there and in England. Later, he moved back to America and settled in California.

He wrote pulp fiction about the city of Los Angeles and a detective there named Philip Marlowe. Chandler’s first novel was The Big Sleep (1939), which sold well and was made into a movie in 1946 with Humphrey Bogart and Lauren Bacall — William Faulkner co-wrote the screenplay. Chandler wrote seven more novels featuring Philip Marlowe, who became the quintessential “hard-boiled” private eye, tough and street-smart and full of wise cracks. In Farewell, My Lovely (1940), Marlowe says: “I needed a drink, I needed a lot of life insurance, I needed a vacation, I needed a home in the country. What I had was a coat, a hat and a gun.”

Chandler was never any good at coming up with plots. He had to study and steal from other mystery writers like Dashiell Hammett. But he knew how to create atmosphere. One of his early stories, “Red Wind” (1938), begins: “There was a desert wind blowing that night. It was one of those hot dry Santa Anas that come down through the mountain passes and curl your hair and make your nerves jump and your skin itch. On nights like that meek little wives feel the edge of the carving knife and study their husbands’ necks. Anything can happen.”

Chandler is famous for his metaphors. In one novel he wrote, “She smelled the way the Taj Mahal looked by moonlight.” In another he wrote, “She gave me a smile I could feel in my hip pocket.” I want to add one more, “She had more curves than the Monaco Grand Prix and was twice as dangerous. Her jewelry was mute testimony that Charlie Chaplin wasn’t the only tramp who hit it big in this town.”

Murder mysteries have found such a large audience because the good ones subtly engage the reader. They draw you in from the very first page and dare you to solve the crime before it’s solved within its pages. Good mysteries kill someone off in the first third of the book, preferably the first few pages. I am not sure Dame Agatha would do so well were she publishing these days. In her day authors could take some time to build the scene, develop characters, and lead up to something. These days, one must capture the reader in the first few sentences. In Latin it is called “in media res” which means “in the middle of things.”

A story has to begin somewhere in the middle not at the beginning. Something needs to be happening right now. Each chapter should leave something unresolved, a question for the reader about what will happen next. A little bit like life, don’t you think? Conflict and wonder make life, well, lively.

It does you know? We spend a great deal of time wishing we could find just one place of complete resolution, but much of the joy of living comes from anticipation – what will happen next. A completely predictable life is the very incarnation of dull.

Ok, enough philosophizing. I actually began this post to introduce my next book. Yesterday, I hit the Ctrl-S keys and saved the revised draft of my first venture into fiction writing. I have written, and sold, a good many non-fiction articles and books. I had an idea for a murder mystery set on the island of St. Croix where we used to live and actually wrote the first two four chapters some years ago.

But, I got trapped in the cycle of editing and re-writing those first four chapters and just never go out of them. This is deadly for writers. Every writer knows not to edit or rewrite until you’ve finished the piece. So the work sat there, billions of electrons trapped in a file stored both in my memory and that of my laptop. Then, last year I stumbled across an organization called NaNoWriMo – National Novel Writing Month. It is a non-profit that challenges writers to get on with it and write at least 50,000 words of their novel in the month of November. It sounded like the kind of gently prodding I needed so I signed on. And I did it. 55,000 words later the manuscript was finished. 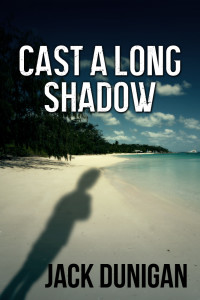 Well, the first draft was done. I edited and rewrote it while I was on an extended trip. Then a few weeks ago I printed out the revised draft and edited again on paper. Then I transferred the paper edits to the electronic file, found a couple more places to add, subtract, or revise. Yesterday, about 4 p.m. the file was saved and I sent it off to three associates who will make their edits.

“Cast a Long Shadow,” the working title so far, takes us to a resort hotel on a secluded bay on St. Croix. The hotel’s detective probes into the deep shadows of the past to solve the crime. Along the way he uncovers blackmail, a mysterious woman, and corruption.