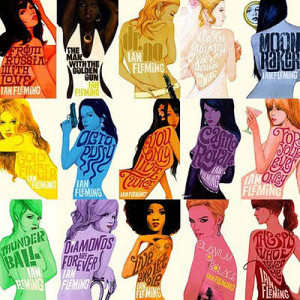 Bond and his many women are part of the same picture, pun intended. Each time a new Bond movie is planned, the media pole vault each other to predict who will be the next Bond girl. As the longest running film franchise in cinema history, Bond women are envied and admired. Most have won a permanent place in our memories if not in the record books. For many, an appearance as a Bond girl energized their career.

As glamorous as is the role, and with as much attention as the public gives to each Bond girl, there is no escaping the fact that Bond is a relentless and incurable womanizer. Each movie reveals one conquest after another. For most then, the idea that Bond is a role model or pattern for living may seem both base and insensitive. After all, how can one admire a man whose life is but one succession of shallow and temporary conquests.

Perhaps we could leave it at that and appeal to the male instincts that would place a series of sexual experiences as being the ideal. On the surface it would appear that this is true, if popular culture is to be believed. However, there is an exception to the Bond experience that betrays a more widespread portrayal of his life.

Bond did marry. In the books it was in On Her Majesty’s Secret Service. Bond rescues the Contessa Teresa di Vicenzo, the only child of the head of a powerful Corsican crime syndicate, from a suicide attempt. Over time they fall in love and decide to marry. The incident is clearer in the novels than in the movies. Bad guy Ernst Blofeld and henchwoman Irma Bunt ambush the couple on their wedding day, shooting at them as they drive away for their honeymoon, killing the Contessa. In the pre-titles sequence of the movie For Your Eyes Only, Bond lays flowers on a grave whose headstone simply reads “TERESA BOND, 1943–1969, Beloved Wife of JAMES BOND, We have all the time in the World” – referring to the final words in On Her Majesty’s Secret Service.

The all-too-brief and oh-so-painful marriage is referred to twice more in the movies.  In The Spy Who Loved Me, when Bond meets Anya Amasova in the Mujaba Club bar, in Cairo, Egypt, she recites a few facts about his life, including that he had been married only once and that his wife was killed. Bond says “Alright, you’ve made your point.” Anya comments upon Bond’s unexpected sensitivity regarding his marriage. Once more, In Licence to Kill, after Felix Leiter’s wedding, Felix’s new wife Della throws her garter at Bond, teasing him, “the one who catches this is the next one to…” Bond looks visibly pained; when Della asks Felix about it, Felix makes a short, sad reference to Bond once having been married, “but that was a long time ago.”

Bond’s intense hatred and relentless pursuit of Ernst Blofeld can be linked to and blamed upon this unhappy incident. So to, perhaps, can Bond’s persistent bed-hopping. You are probably wondering how I am going to find this less than virtuous example as a pattern from which one can learn how to relate to women.

Well, in my introduction to this series (which you can read here) I emphasized that Bond is as much a caricature as he is a character. Caricatures portray a character’s flaws, faults, and characteristics in ludicrous exaggerations and this is certainly one.  There is, in the Bond persona, an underlying sense of  ridicule, of poking fun at the unrealistic and unreasonable nature of what he does and who he is. Far from being realistic, Bond is an object of fantasy, a figment of imagination taken to extreme proportions. No one actually lives like this. Nowhere is this more evident than the Bond adventures with women.

So what, you ask, can be my point?

Men are men, always have been, always will be. Men like women, find them creatures of mystery and appeal. But I learned from Bond that life is built best in the company of a single woman, the kind that you want in your bedroom when you’re sick and in your bed when you’re not.

Just a few weeks ago, my wife and I celebrated 41 years of marriage. I acknowledge that this is unusual these days. Back when we celebrated our 25th anniversary Sue remarked to a friend that we were marking 25 years together. The friend said she too had been married 25 years but not to the same person.

Well, we have. ..and it is now 41 years and counting. Bond has plainly demonstrated to me that there are lots of women out there, but there is a special one who can never be replaced. While many women may capture your attention, only one will capture your heart.

1 thought on “What James Bond Taught Me About Women”