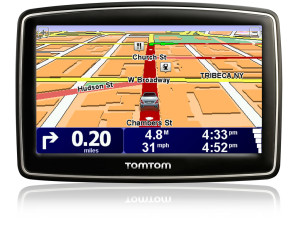 On my way back from Lowe’s I thought I’d try out my new TomTom GPS device. I entered the address and tapped the button to find a route. The map which appeared on the screen looked right so I set off. Turn by turn it told me the way, not that I didn’t know it already.

Everything went well until I turned down the street to my house. The device told me my house was straight ahead. “No kidding,” I thought. I reached my driveway preparing to turn in. But the device had other ideas. “Keep going,” it said. On a lark, and because I knew there are no cliffs or piers to drive off of, no lakes or rivers to drive into, no blind alleys to get stuck in, I followed on. It took me farther up the street and around the corner to a house with the wrong number. To this day, even though I have set and reset the device, it cannot find my house.

TomTom and Garmin are two of the better known GPS brands. Most cars these days either have them built into the vehicle or their owners have a portable unit (like I do) or an app in their smart phone. We’ve learned to rely on them…too much it seems. The stories of serious error as a result of blind reliance on the device (check out 8 such stories here).

Now, this post is NOT about GPS systems even though I started by referring to one. No, it’s about finding direction and destination on a far more critical level – life. Some of us simply drive by whim, taking each day as it comes with little thought to destination.

But most have at least some idea of where we want to go in life, and set out to live accordingly. We have imprinted upon us a set of values from childhood, an idea of what we’d like to do and where, and a set of beliefs about life, how to treat others, and by what values to live.

We are, with some solace, not alone even though we may feel like we are.

“Midway upon the journey of our life, I found myself within a forest dark, For the straight foreward pathway had been lost.”

Some call it a paradigm shift when a set of perspectives about life, how and what we believe suddenly undergoes stark revision. Like when you realize that that oh so reliable GPS is not so reliable.

Here are 5 things to remember:

Things change, you should too. There is no crime in that. I remember visiting a church where I had spoken many years before. When I finished my message, a person who had been there back then told me, “You’ve changed. You’re not the same person you were.” Well, I hope not.

And I hope you aren’t either. If the great Dante found himself seeking a new path forward at midpoint in life, you can too. Many don’t. They simply refuse to make the adjustments and live life as though circumstances have not changed. It seems sad to content oneself with the nostalgia of what was when there is so much that not yet is.